As a writer it is my job to read books that are in my genre so I know what has been done, what is being over done, cliches, etc…

I hate to admit it, but I am one of the people that got on the Hunger Games train late.My friend Hanna told me about them, but why on earth would I want to read a book about that? I thought she was crazy, I assumed she found some random, ill-written book. A few months later Jacob told me that he wanted to read the same book and asked if I would read it to him. We went to Walmart picked up a copy and started reading. By three chapters I was hooked! After we finished reading it and saw the movie, I spent the next two weeks asking my self over and over again the same thing,  why? Why is this book such a big deal? Why is it so popular? What makes it so addicting? What makes it so good? No one knew. Google didn’t even have the answer. I let the question drop, and read the other two books in a week. Over a year later and I still don’t have the answer. I do have a few ideas though. 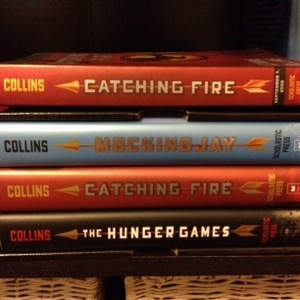 Yes that is an ARC of Catching Fire, and no you can not have it!

A fair amount of people think it has to do with the plot. I don’t think so. After I read the first book, I had a pretty good idea where the rest of the books were going. Honestly the only thing that really surprised me about the plot were two unfortunate deaths in the last book, (for spoiler reasons I won’t say who).  I was addicted to it as everyone else, even though I had the plot  pretty well figured out. So I am going to say that it was not the plot that made it take off.

I tend to agree with this one. The characters took the world by storm. Collins turned the world of books around with Katniss. For years books have been about female characters that don’t do anything to take control over their life, they are weak, etc. All the same, girly girls. Now days most girls aren’t like that, they don’t want boys saving them, and they certainly don’t want to let people control their lives. Katniss is a very relate-able character in general.

She isn’t even interested in boys till a good way through the second book, and when she does, she can’t explain her feelings. She doesn’t know how she feels about Gale or Peeta. She cares about her family, and she is responsible for them. She has a younger sibling that she is willing to die for, and that is something to a lot of young adults can relate to. She lost a parent and her mom hasn’t dealt with it,  so Katniss has to step up. Katniss is sarcastic, she’s funny, and we love her.  She is enough reason to read the book without Peeta and Gale even though they are pretty awesome, (I won’t go in to detail about them). Seriously, Peeta is willing to die for someone who doesn’t even love him back.

I do not own the rights to this picture. (Pinterest)

It was good, clean, wonderful, self sacrificing, romance. Personally I could have done without the love triangle, but I think that Collins did a good job with it.

I do not own the rights to this picture. (Pinterest)

Suzanne Collins was able to write about something so horrible in a way that made you open your eyes to how bad everything was, without killing your heart. She was able to add humor to the story when it was needed, (i.e the elevator scene in Catching Fire). Not to mention that it is all clean. Suzanne Collins never uses a bad word, and the writing isn’t too gruesome.

Even though there was a fanbase for the Hunger Games before the movie came out, and even though the first movie was not done as well as it should have been, it still helped the book. The fandom for the Hunger Games is still growing with every movie, and it will continue to grow.  If for no other reason Jennifer Lawrence will keep it going. That girl is Katniss. Everyone likes her.

I do not own the rights to this picture. (Myhungergames.com)

Obviously there is going to be a fair amount of violence, which plays a big role in our society now days. It deals with a society that in a way mirrors our own. We may not being forcing kids to kill each other on TV, but are we any better than the Captiol?

Do we agree with murder? In some way yes, I think we do. In fact we spend hours agreeing with it every week, we kill virtual people. There is blood, there is death, there is even victory in that virtual death. We are turning in to a society that treats death as a game, literally. Now, I know that you are saying this is a bunch of lies, but it is not. There are actually a lot of studies proving that this is right. A study done in 2012 showed an increase of aggression after playing video games, and watching violence on TV frequently. A real Psychological study, I read about it in my text book, it was a real eye opening chapter. The question is, how soon will it be before something really drastic happens? Suzanne Collins has opened the box to something big, and I hope that everyone will get what she is trying to say about our society before it is too late.

You have to read good books, because you only write as good as the books you read.  Unfortunately, that means that sometimes you sit, pout, and wonder why that book is so good, why you didn’t write it first, and hate your self because you know your book will never be that good.